The Xbox Wireless Headset is a solid workhorse thanks to a couple of really smart design ideas and better-than-average sound. It also has a few elements that aren’t necessarily bad, but can’t be described as impressive, like its microphone and its battery life. It nails the important stuff, though, and the useful features far outweigh the problems when you’re talking about a $100 headset. While it won’t scare any high-end home theater headset rivals, it’s a strong and versatile mid-level pick for day-to-day Xbox use.

The Xbox Wireless Headset looks very elegant. Fashioned in black molded plastic with just a splash of Xbox green on the cans, the blend of slim, sharp edges on the top band with the not-quite concentric circles of the outer earcups and ear padding create a striking look that’s simultaneously sleek and spacious. Much like Sony’s Pulse 3D headset, it’s designed to look like a match for the console. 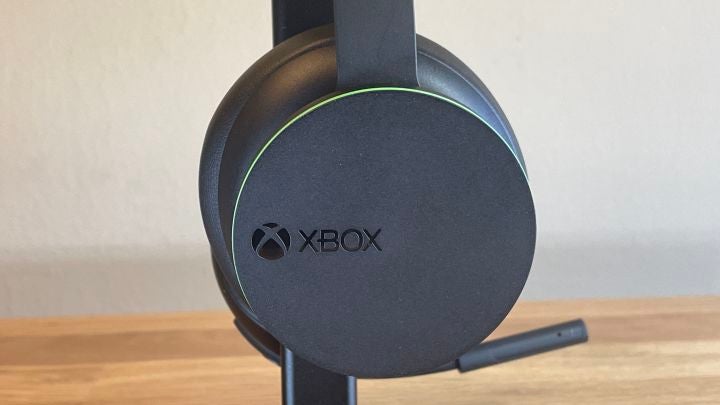 The adjustable top band – hard plastic with a steel inner frame – looks narrow, but adjusted to fit my wide head just fine. The sides of the band slide so you can adjust the fit: there’s a tactile response as you adjust, helping you keep track as you find your fit, though it lacks a visual indicator to help you match the adjustment on both sides. The inner face of the band features leatherette-coated foam padding, which is very firm, but comfortable. Then again, at only 10.97 ounces, the padding doesn’t need to keep that much weight off your head.

The earcups are also padded with supportive leatherette and foam. That padding creates a seal that provides a relatively small, but still noticeable passive noise-cancelling effect. That said, the padding can be a bit overbearing. While the space inside the cans looks and sounds cavernous, from time to time I would notice part of the padding uncomfortably rubbing against the base of my ear. It’s fixable, but also a sign that maybe the cups are a little too small, or at least set a little too narrow. On the inside, the headset features 40mm drivers, which generate a sharp, concussive sound. (We’ll talk more about that later). 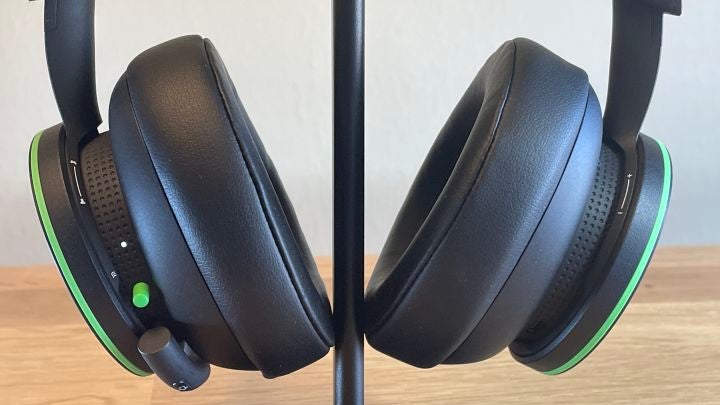 The Xbox Wireless Headset’s best asset is its simple but graceful earcup controls. Instead of loading the back of the earcups with a stack of indiscernible buttons, it spreads out its controls using dials and just a couple of buttons, all of which are easily distinguishable by touch. The outer circles of the earcups are both rotating dials: Your right ear controls volume, your left controls game/chat mix. There are just two buttons on the left cup: Directly in back, you have a long, thin pairing/power button. Below it, on the base of the mic boom, you have a flat, inset mute button. Lastly, there’s a somewhat hidden USB-C port on the right earcup, in the gap between the inner earcup padding and outer dial. Given their positions and shapes, you’d never mistake one control for another once you know where everything should be, which makes them infinitely more useful than the vast majority of onboard headset controls. 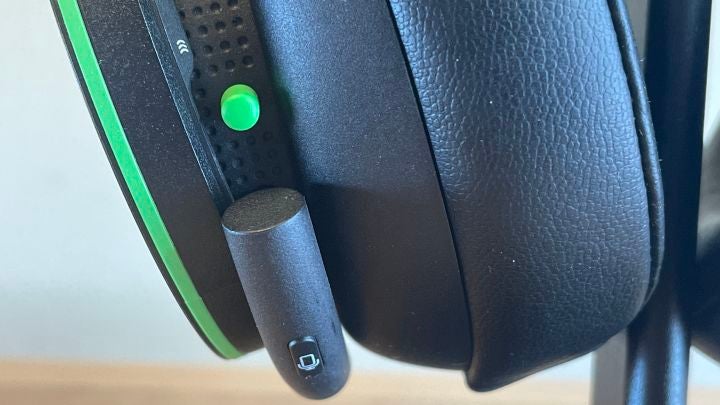 The microphone, meanwhile, has some ups and downs. In a mic test in Logitech Capture, which I use to prep video calls, I found that the mic added a slight tinniness to higher tones. The stubby boom is also a bit too short to get it properly adjusted in front of your mouth. Surprisingly, though, it picks up your voice very clearly. That said, like the Pulse 3D headset, it also picks up a lot of ambient noise.

In theory, Microsoft has a countermeasure for the issue: An adjustable “auto-mute” sound isolation feature that’s supposed to “silence your mic” when you aren’t speaking to block more non-essential sounds. Though it mitigates some softer noises, it failed to keep out many of the incidental sounds that might accidentally disrupt playing, even on the highest of three settings. It blocked the sound of me gently pounding my fist on my desk, but still picked up typing sounds of my mechanical keyboard and the sound of me snapping my fingers a few feet away. In the end, it comes out as a wash: The auto-mute blocks enough noise to make the headset clear and usable, but it’s far from achieving the same isolation and tone of truly great headset mics, like Logitech’s Pro X headset, either. 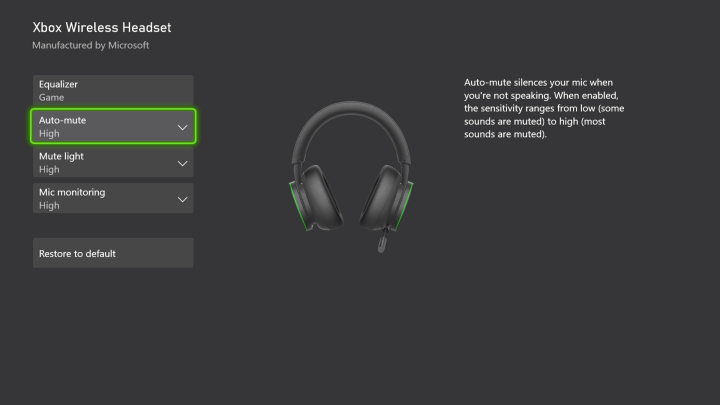 Like just about every Xbox peripheral these days, the Xbox Wireless Headset has versatile connectivity, supporting both the Xbox wireless protocol for consoles and Bluetooth for PC and mobile devices. You can also use the Xbox protocol on Windows via the Xbox Wireless Adapter, or wired via USB-C. (You will need to bring your own cable, though. The included 14-inch USB-C cable is barely long enough to facilitate charging, nevermind a comfortable listening setup).

In both cases, pairing the headset is incredibly easy; simply hold the pairing button on the headset for a few seconds, then either hold the pairing button on your Xbox or go through the Bluetooth pairing process on your PC or mobile device. The headset gives you sound from whatever device you paired with last, so you do need to pair every time you switch devices, but it’s a simple process.

That said, using the Xbox Wireless protocol on consoles does confer some extra benefits, albeit small ones. You can use the Xbox Accessories app without plugging in the headset using Xbox Wireless. And, like other headsets, turning on a paired headset will boot up your console. These kinds of little touches make the headset feel like a more profound upgrade on console than on PC.

Battery life is a bit of a weak spot, though. According to Microsoft, the Xbox Wireless Headset should last up to 15 hours on a single charge. My testing found that it lasted through more than a full day of play, which is in line with the company’s estimate. Many headsets we’ve tested, such as the Turtle Beach Stealth 700 Gen 2 and the Razer Nari Ultimate, can go up to 20 hours though, which can be the difference between getting three and four days of play off a single charge.

The Xbox Wireless Headset offers basic EQ customization and a few other settings on both Xbox consoles and PC through Microsoft’s Xbox Accessories app. Clean and clearly laid out, the app allows you to adjust the headset’s levels, either using a series of presets or making your own, though you can’t save custom profiles. You can also activate auto-mute and mic monitoring, or adjust the microphone indicator lighting. 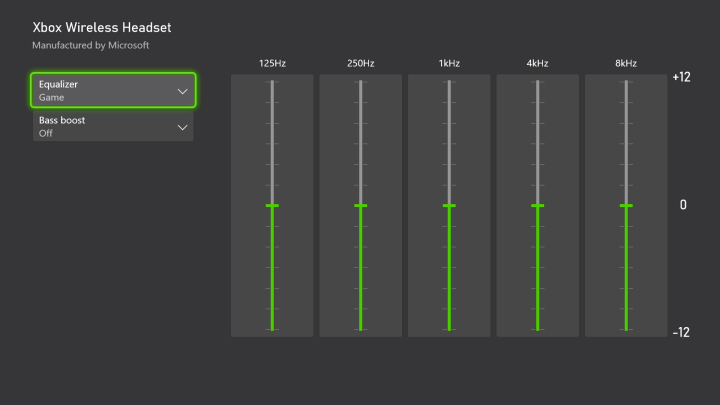 Depending on how you approach it, the app is either anemic or a breath of fresh air. By PC standards, the settings here feel like the bare minimum. On Xbox, though, where configuration apps are still few and far between, any customization is better than nothing. Even with a few blatant oversights – for example: if there’s an input test on my Elite: Series 2 controller, shouldn’t there be a microphone sound check for the headset? – this will feel like an upgrade for most Xbox players.

The Xbox Wireless Headset provides bassy sound that manages to stay crisp across its full range. Like many budget and mid-range headsets, it delivers a bass-heavy soundscape that packs a real punch when the grenades go off and things get explosive in, say, Call of Duty: Black Ops Cold War. Unlike other headsets, though, its deep lows don’t impact how it sounds outside of those situations. In Control, in-game dialogue comes through crisp and clear. The ever-encroaching sound of the Hiss stays distinct from the echoey messages that come from the beyond. And, in Fuser, you get good separation between the channels, which lets you dig into the individual pieces of the songs in your mix. 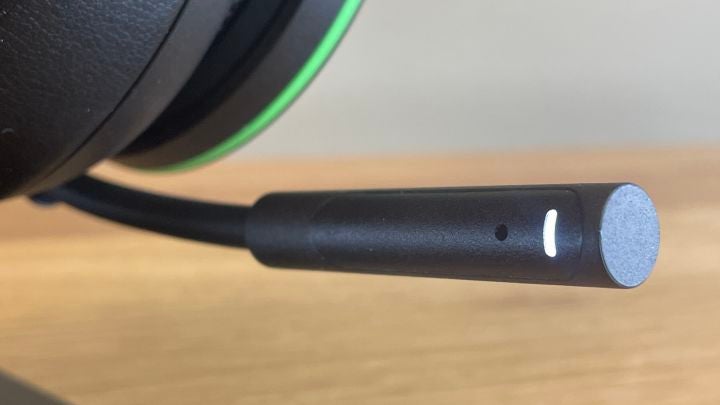 The Xbox Wireless Headset supports the Xbox’s many virtual surround sound standards, including Windows Sonic, Dolby Atmos, and DTS Headphone:X. Using Dolby Atmos, my favorite of the three, the headset provides strong, useful positional audio. In Control, the sound of the Hiss felt like it surrounded me. In Call of Duty, I could discern the directionality of footsteps, and locate an enemy based on the sound of a bullet sailing past my head. That said, even with Atmos, the Xbox Wireless Headset’s surround sound doesn’t create the same sense of spatial awareness as Sony’s Tempest system in the PS5, particularly when used with the Pulse 3D headset.

In non-gaming situations, the headset has a bit more limitations. Listening to music on Spotify, I found that songs like “Love Again” by Dua Lipa come through slightly compressed. The music is clear, but certain parts of the song feel like they’re merging together. These kinds of mild aural flaws aren’t uncommon for a gaming headset, especially at this price point. At the same time, I’d much more readily recommend these to an Xbox player than someone on PC, where there are more options with universally superb audio.

The Xbox Wireless Headset will be available for $99.99 starting March 16, 2021, at the Microsoft digital store and other retailers, including Amazon.