After decades of vampires hogging all the spotlight in the World of Darkness, I’ve been drooling over the prospect of a good Werewolf: The Apocalypse game to showcase my favorite side of that fantastic universe… but it might be a couple decades more at this rate, because Werewolf: The Apocalypse – Earthblood is an unambitious swing at video game-ifying the beloved tabletop roleplaying game of fangs and fury that originally got me into that hobby. If it can’t make transforming into a massive beast and ripping your enemies limb from limb fun, what are we even doing here?

In Earthblood, you play as Cahal, a Garou of the Fianna tribe born under the moon sign Arhoun who must battle Banes and Fomori to save Gaia. If you found that sentence confusing, this story is going to be a doozy because it barely ever stops for even a moment to explain any of the concepts of its rich but sometimes perplexing setting. And to anyone without an understanding of werewolves and their culture, a lot is going to be lost from its storytelling. This stands in stark contrast to the classic Vampire: The Masquerade – Bloodlines, which is set in the same universe. That game spends the first few hours explaining to you what vampires are, what they can and can’t do, and how their society works. Earthblood, meanwhile, seems to be written for existing Apocalypse fans only. If you’re exploring this part of the World of Darkness for the first time get ready to be bewildered – and that probably describes most players.

Anyway, Cahal is a tough guy in a leather jacket with a bunch of stock character traits who, through about half the story’s 20-ish hours, doesn’t seem to be able to express anything that would register above a two or a three on the emotional Richter scale. This includes when multiple people close to him are killed. In a game with the tagline, “When will you Rage?” it’s kind of a problem that your lead character has a hard time expressing believable anger. The voice acting improves a little in the second half, but overall it’s very flat. And the dialogue writing isn’t particularly good, either, which ends up making most of the characters seem almost creepily robotic.

Cahal and his werewolf buddies are basically eco-terrorists, fighting against an oil company called – and I am really not making this up – Endron. If this were South Park or Robot Chicken, that kind of on-the-nose nod to a real company might have worked. But tonally, there is no levity to be found at any point in Earthblood: these are serious business werewolves. Each level involves infiltrating these greedy polluters’ facilities, sneaking past security, beating up guards, and completing simple objectives like planting a bomb or putting a bug on a computer terminal.

[poilib element=”quoteBox” parameters=”excerpt=Stealth%20action%20is%20the%20one%20thing%20that%20kind%20of%20works%20about%20Earthblood.”]This central stealth action routine is the one thing that kind of works about Earthblood (which is nice, except that werewolves in Apocalypse aren’t generally known for their stealthiness). Going swift and sneaky in wolf form lets you sabotage equipment, shut down turrets, and thin the herd with stealth kills. And to its credit, the levels are well-constructed enough to make whittling away the defenses as much as I could before the alarms went off a satisfying puzzle that tested my observation skills and quick execution. But on the other hand, when it’s fully possible to just kick the door down, roar, and splatter all of your enemies into jelly on normal difficulty, it can feel like a waste of time because you don’t get any extra rewards for doing things the quiet and patient way.

A lot of Earthblood’s weaker points could have been forgiven, at least to some degree, if Cyanide had managed to make it fun to go on a rampage as a snarling 400-pound hellbeast. But forgiveness must be earned, and combat – the part of Earthblood that seemed to get the alpha’s share of the attention – is really mediocre.

[poilib element=”quoteBox” parameters=”excerpt=The%20fact%20that%20you%20never%20feel%20scary%20hurts%20the%20roleplaying%20experience%20a%20lot.”]It’s floaty and arcadey in the worst way. You don’t feel much of a sense of momentum, which hurts the illusion that you’re playing as a massive, bloodthirsty beast. The animations aren’t that great either, and that’s particularly noticeable when most enemies won’t even flinch as they’re being slashed by a clawed arm as big as they are. They’re too dumb to even flee in terror when you’ve killed all of their friends! It’s a far cry from the World of Darkness tabletop game, in which most average mortals go temporarily insane just from looking at a werewolf in the Crinos form. The fact that you never feel scary hurts the roleplaying experience a lot.

There’s some variety to the slaughter in that you can toggle on and off a special heavy stance, but that just makes you into a plodding, cumbersome Frankenstein’s monster. Why the designers would choose to include this instead of one of the other iconic Garou forms from the lore doesn’t make much sense to me. Especially when the bear-like direwolf shape from the tabletop game is used by several werewolf NPCs, but you never get access to it yourself.

Building up a special meter in Crinos form can let you activate Frenzy, but it’s basically just a power up that, for a limited time, lets you kill just about anything by button mashing. That’s disappointing because in the lore, Frenzy is a dangerous and even transgressive act in Garou culture, but that’s only briefly explored, and not in a way that gives you any reason to avoid using it. The World of Darkness breaks down entirely when its superficial power fantasies aren’t tempered by real, usually horrifying consequences. And that fact is written all over Earthblood.

The enemy design is extremely annoying as well. Security guards with shotguns will just stand there blasting you with cones of buckshot even when you’re right up in their faces going to town. You’d think it would be hard to aim when you’re being actively mauled by a monster twice your size, but not for these guys. Most human foes will also slide around like they’re on ice skates when you come barreling into them, rather than being knocked down.

Some of the boss fights against monsters and giant corporate mechs are okay, in that they’re refreshing and even sometimes challenging compared to fighting hordes of henchmen. Having to fight two enemy werewolves at once was probably the most fun I had with the combat in Earthblood. But in general, I ended up playing a lot of the levels in almost pure stealth mode just because fighting isn’t enjoyable, and the lackluster upgrades from progression never made it that much better.

[poilib element=”quoteBox” parameters=”excerpt=I%20ended%20up%20playing%20a%20lot%20of%20the%20levels%20in%20almost%20pure%20stealth%20mode%20just%20because%20fighting%20isn’t%20enjoyable.”]Story missions and boss fights give you spirit points, which you can also find more of by exploring each area using Earthblood’s version of the obligatory Batman Detective Vision. The perks and abilities they unlock are mostly so underwhelming, though, that I would sometimes let them stack up for hours because there was nothing I was all that excited about buying, and when I finally did it just confirmed I hadn’t missed anything. They mostly make you better at the things you can already do or let you throw in an extra special move to your attack combos, but that doesn’t really change how you fight. Almost none of them open up new ways to play, in or out of combat.

I don’t get a sense that I’d have a significantly different experience if I were to play the campaign again and make different choices because you don’t get to pick Cahal’s Tribe or Auspice (the moon sign a werewolf was born under, which serves almost like their character class in the tabletop game), so there isn’t much by way of customization. You don’t even really get to decide how you want to roleplay him. Aside from one story choice at the very end which is played out with all the emotional weight of a wet sock, his personality and values are set in stone. I am again compelled to contrast this with Bloodlines, in which all the different ways of making your vampire your vampire were among the main strengths.

[poilib element=”quoteBox” parameters=”excerpt=You%20don’t%20get%20to%20pick%20Cahal’s%20Tribe%20or%20moon%20sign%2C%20so%20there%20isn’t%20much%20by%20way%20of%20customization.”]I could go on and on about how Earthblood also fails to successfully capture the major themes of Apocalypse, or any of the things that make werewolves in that universe so uniquely cool. There’s a lot. And it’s especially frustrating because there are some artifacts of a better game here. For example, during development, Cyanide mentioned that keeping your inner beast caged for too long by using stealth and diplomacy could lead to your rage overflowing, causing an involuntary transformation and starting a fight at a perhaps inconvenient time. That would have been awesome, and it’s the sort of thing that happens in the tabletop game all the time! Losing control and going on a rampage is as much a part of being a werewolf as drinking blood is part of being a vampire. But it doesn’t seem to have made it into the final game, because there are never any lasting consequences for anything you do.

How To Get Into The Werewolf Tabletop Game

If you’re interested in the world of Werewolf, there unfortunately aren’t any halfway decent video games that can introduce you to the setting. But the tabletop RPG on which it’s based is still available, and it’s a lot of fun! 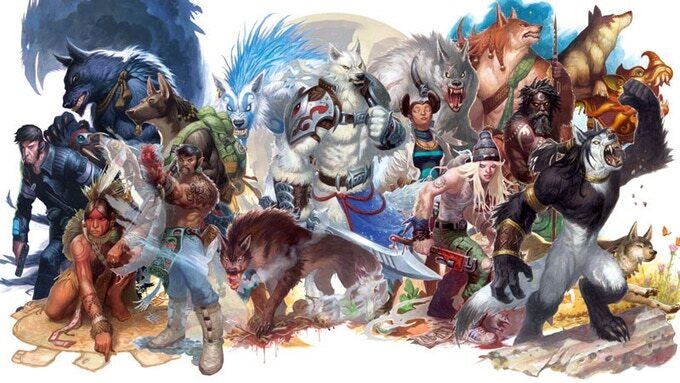 Building up your rage meter just gives you more mana points to use when you do go full beast mode. Earthblood barely deals with the consequences of being a monster outside of some incredibly short, scripted story moments that had nothing to do with any choices I made. A level that takes place inside a prison and lets you negotiate with a powerful inmate to get information almost managed to be interesting… until I realized I could still just berserk out and easily kill all the guards to skip those missions entirely. There was no incentive to ever use anything but violence to achieve my goals – not even a pat on the head.

In the background, the music is generally just as boring as almost everything else. Generic, distorted guitar riffs make up the bulk of it, which at least fits with the overall mood and tone of Werewolf: The Apocalypse and its often over-the-top action-horror sensibilities. None of the more contemplative or emotional moments are scored appropriately, though. This soundtrack has one trick, and it’s only really good at drip feeding you a bit of extra adrenaline. The one exception is Kai Tangata, a pulse-pounding track full of intimidating chants and a clean, emotion-rich vocal hook written in the Maori language by Alien Weaponry, an excellent Maori metal band from New Zealand. It seems to only be used on the menu screen and over the credits, though, so it’s a bit underused.