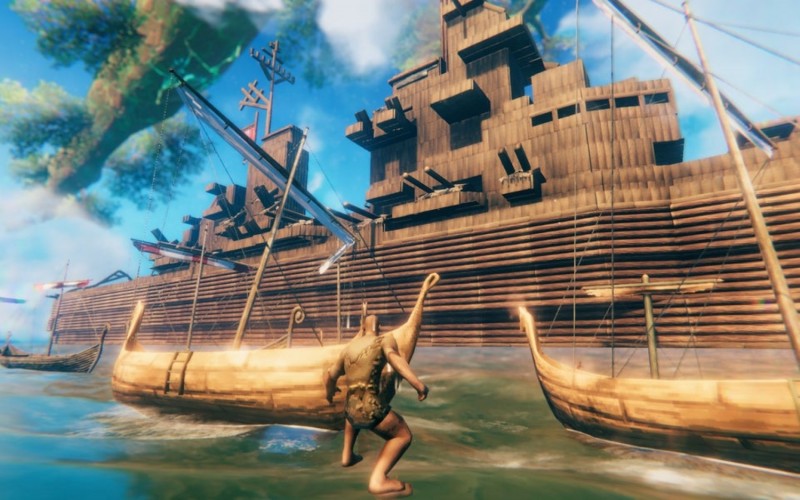 Valheim players are incredible when it comes to putting their creativity to the test. Earlier this month, we shared an impressive 1:1 replica of Skyrim’s Whiterun that is still in progress. Now we’re sharing a slightly different kind of creation: a humongous U.S Navy battleship replica.

As a former U.S. Navy sailor (turned greenside Marine), this wooden creation by Redditor u/wjdql64334 was too good not to share. This creation was modeled after the USS Iowa (BB-61), a retired battleship that was actually the fourth ship to be named after this particular state in North America. Given that Valheim doesn’t quite have the same creative resources that titles like Minecraft have, this build is insanely impressive.

It’s impossible to get an exact replica with the in-game creative tools in its current Early Access state, but who knows? The team behind Valheim continues to make updates to the Viking experience to prepare for a full launch; maybe even more color options and crafting help will be on the way.

If you’re really particular and want to compare in person (there are even online tours), the battleship Iowa is on display in the Los Angeles, California museum seen here.

As for the game itself, it’s been taking our community by storm. Valheim continues to dominate the Steam charts, and for a good reason. This survival game is one of many, but where it shines is that it’s a survival game for those that might not particularly like this genre. It’s not as unforgiving as other titles in this same niche, and the soundtrack is beyond compare. It’s soothing, it’s challenging, and it’s all done perfectly in tandem for a social experience that is amazing shared and equally enjoyable solo.

There are so many mods out there to make a great game even better, as well. While many more have been added since our recommendation list was added, you can find a list of essential mods that we love right here. You can also learn more about what it takes to succeed in the world of Valheim with some helpful tips and tricks, courtesy of our own Dan Tack, with our game hub here.