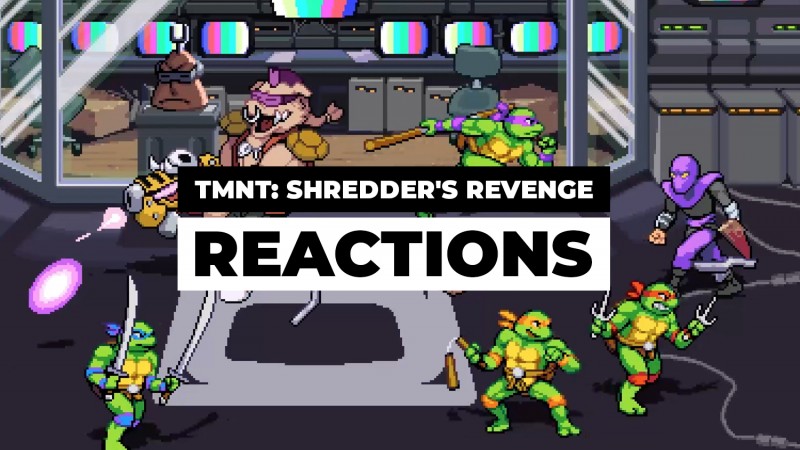 In case you’ve been hiding under your shell, the Teenage Mutant Ninja Turtles are back in a new, retro-inspired adventure called Shredder’s Revenge. The game comes courtesy of Tribute Games and Dotemu, who know a thing or two about creating arcade-style experiences having worked on Scott Pilgrim vs The World: The Game and Streets of Rage 4. Shredder’s Revenge takes heavy inspiration from the classic beat ‘em ups like Turtles in Time and pits you (and up to three friends) against Shredder and his goons. You can read all about what the game entails and watch its debut trailer in this extended preview article here. I recommend doing that first, because we’re going to react to the trailer and talk all over it!

The game’s stylish debut trailer showed off a fair amount of gameplay as well as offered some potential teases about gameplay elements yet to be revealed. If you’ve watched our reaction videos to the Mortal Kombat movie trailer and the reveal of Pokémon Legends Arceus you know what to expect; a lot of hot speculation, a bunch of bad jokes disguised as comedic gold, and a ton of rewinding and pausing to zero in on those overlooked details.

So grab yourself a slice of pizza and join Alex Stadnik, Joe Juba, and myself as we break down the Shredder’s Revenge reveal trailer, share our hopes and dreams for the game, reveal who our favorite Turtles are, and rock out to that sweet, nostalgic theme song. I think you’ll find it to be the best analysis of the announcement above or below ground. Because the Turtles live in sewers, you see.

If you enjoyed this video feature, be sure to check out our YouTube channel and subscribe for more fantastic video content including our cover stories videos, The Game Informer Show, developer interviews, gameplay streams, and more!

Return to the Haunted Castle Rock in We Were Here Forever