Super Smash Bros. Ultimate game director Masahiro Sakurai revealed the news during a deep-dive of these latest fighters to join the roster.

Pyra and Mythra will arrive alongside the Cloud Sea of Alrest stage and will be available as part of Super Smash Bros. Ultimate Fighters Pass Vol. 2 for $29.99 USD or separately for $5.99 USD.

While Pyra and Mythra are technically one fighter in the selection screen, players are able to alternate between them at will during battle. Pyra is a much more powerful fighter, while Mythra excels in speed. By switching at opportune times, players will be able to take advantage of each of their strengths and keep their opponents guessing.

While Pyra and Mythra were chosen over Rex for DLC Fighters, he does make an appearance in both of their Final Smash attacks – Burning Sword for Pyra and Sacred Arrow for Mythra. Pyra’s attack is meant for KOs while Mythra’s is for damage.

The new stage, Cloud Sea of Alrest, is based on one of the most iconic settings in Xenoblade Chronicles 2 and is set on the back of Azurda, a massive creature that swims through the Sea of Clouds.

As the battle rages on, familiar characters and sights from Xenoblade Chronicles 2 will make an appearance.

You may also be wondering what Kirby will look like once he absorbs the abilities of Pyra and Mythra. Luckily, Nintendo Versus has you covered. 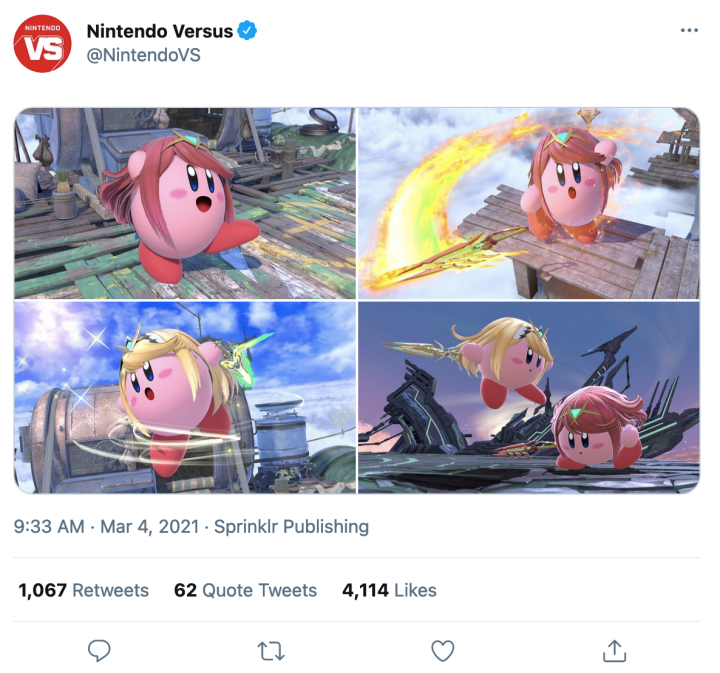 Pyra and Mythra arrive after Final Fantasy VII’s Sephiroth joined the roster of Super Smash Bros. Ultimate. As previously mentioned, that leaves two fighters left to be announced for the Fighters Pass Vol. 2.