Nintendo has announced that there will be presentation next week that will not only give fans an in-depth look at Super Smash Bros. Ultimate’s upcoming fighters Pyra and Mythra, but it will also reveal their release date.

Announced on Nintendo’s Twitter, this showcase will take place on March 4, 2021 at 6am PT/9am ET/2pm GMT and will be led by Super Smash Bros. Ultimate director Masahiro Sakurai. 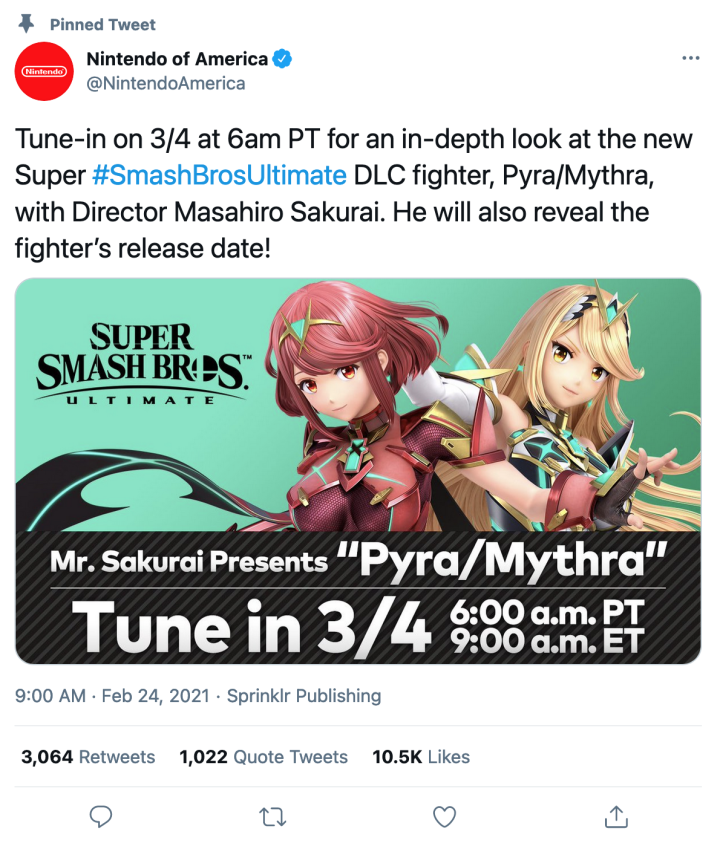 Nintendo also notes that this presentation will be “roughly 35 minutes long” and that there will be “no further new fighter announcements.”

These fighters follow Final Fantasy 7’s Sephiroth as the latest to join the ever-expanding roster in Super Smash Bros. Ultimate. Following their release, there will be two fighters left in the Fighters Pass Vol. 2.

It will be interesting to see if Nintendo once again allows players to unlock Pyra and Mythra earlier than normal if they can beat a specific challenge. While Sephiroth’s release date was set for December 22, 2020, those who completed the Sephiroth Challenge could unlock him well before then.

If you need a refresher on Pyra and/or Mythra’s origins, be sure to check out our review of Xenoblade Chronicles 2 in the mean time.