A new trailer for Returnal gives us a look at some of the unique weapons players will use to survive its hostile alien world. With the game only a couple of months away, this marks the first time players have gotten a deep dive into its combat.

Returnal blends third-person action with a roguelike structure. Players control Selene, an astronaut who crash-lands on a strange planet controlled by a mysterious time loop. Every time Selene dies, she’s reborn and re-experiences the same events again and again. In roguelike fashion, that also means her inventory starts from scratch with each cycle as well (though some elements persist).

Developer Housemarque took to the PlayStation Blog to break down Returnal’s combat, which combines third-person shooting with the studio’s trademark arcade-style action. Base weapons become augmented with various weapon traits that change how they perform, such as exploding shells for the shotgun-like Spitmaw Blaster. Players can stack traits to combine the same effects for “surprising results” in the heat of battle. In total, there are 10 base weapons and 90 weapon traits (with three levels each). Selene can only hold one weapon at a time, however, so players must choose wisely while also experimenting with different loadouts to find suitable combinations. 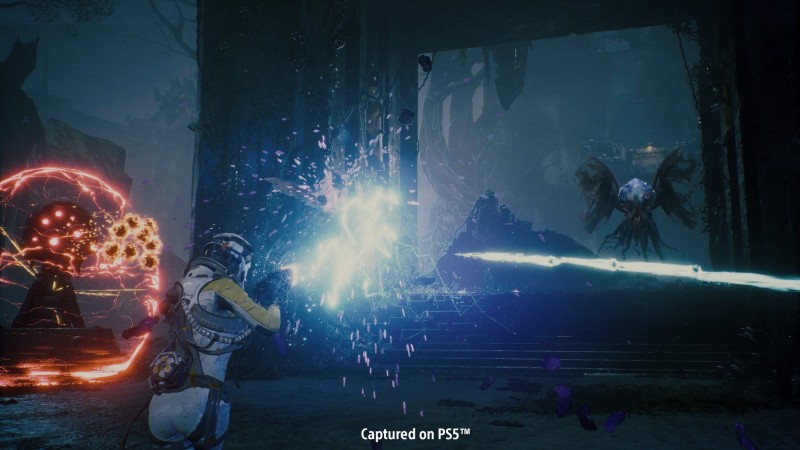 Guns have dual fire modes activated by the Dual Sense controller’s adaptive triggers. Pressing the aim button halfway activates one firing mode and pushing it all the way down triggers the second. This creates a seamless swap between firing modes, which are randomly assigned to guns which each cycle. Other weapons showcased include the Ground Spike, a tool that impales creatures with a massive spike, and the Atropian Blade, a sword that can shatter shields and block projectiles.

In terms of non-weapons gadgets, the bittersweet Parasite might be the most unique. This strange organism latches on to Selene and grants extra health with each kill but slain enemies leave pools of harmful acid behind. Returnal features other risk vs rewards elements, such as cursed chests that grants valuable treasure at the expense of being saddled with a negative status ailment, such as taking damage when opening doors.

After cutting its teeth with arcade-style games like Nex Machina and Resogun, Returnal is Housemarque’s biggest release yet and it looks to be shaping up quite well. We can’t wait to get our hands on it when it launches March 19 for PlayStation 5 and PC.