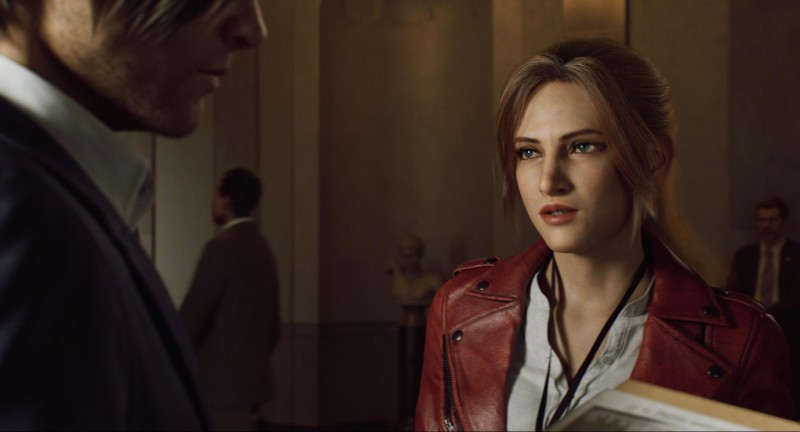 Netflix has quite a few gaming adaptations coming down the pipeline, including a CGI Resident Evil series called Infinite Darkness. Netflix did share a teaser video back in January, now the streaming company has dropped another new look – this time with new key art and a full synopsis.

The TV and movie giant has previously teased the new Resident Evil series, saying “When biohazards run wild, only a pair of veteran zombie slayers can get the job done.” Now, we’ve got an even closer look at Leon Kennedy and Claire Redfield with new stills in addition to an impressive-looking poster:

Resident Evil: Infinite Darkness is bringing back the RE2 remake’s Nick Apostolides as Leon Kennedy and Stephanie Panisello as Claire Redfield. pic.twitter.com/qjIa13hfZc

Regarding the story, Netflix has been pretty vague regarding what the tale will entail other than the series being set within the canon Capcom universe. Now, we’ve got our first look at the story for the upcoming show:

In 2006, the White House, a symbol of the United States, was hacked by someone. Traces of unauthorized access were found in top-secret files under the presidential jurisdiction. US agents Leon S. Kennedy and others convened for the investigation encounter unidentified zombies in the sudden power outage of the White House and control them with SWAT.

Meanwhile, Terrasave employee Claire Redfield encounters a strange painting by a boy with aphasia in a country he visited to help refugees. Claire pursues her own investigation triggered by the picture that seems to have drawn a virus-infected person.

The next morning, Claire visits the White House to petition for the construction of a welfare facility, finds Leon who happens to meet again, and shows the boy’s drawing. Leon realizes something about the connection between the White House zombie incident and the strange painting but leaves the scene saying it has nothing to do with Claire. The two zombie outbreaks that took place in distant countries eventually evolved into a nation-shaking situation.

Now that we know that Claire is heading to the White House, we’ve also got confirmation about some of the cast, particularly our leading protagonists. Both actors are from the 2019 Resident Evil 2 remake with Nick Apostolides reprising his role as Leon and Stephanie Panisello taking point as Claire.

With Capcom’s Hiroyuki Kobayashi at the helm as executive producer alongside Quebico, a 3D animation studio, and TMS Entertainment, the upcoming Resident Evil Netflix series looks like it’s going to be a proper adaptation of such an iconic franchise.

What do you think about the latest look at the upcoming Netflix Resident Evil: Infinite Darkness series? Sound off in the comment section below!

The Outer Worlds: Murder On Eridanos DLC Is The Perfect Murder Mystery Experience To End The Game

Valheim: Here’s How to Tame Wolves, Boars, and Lox