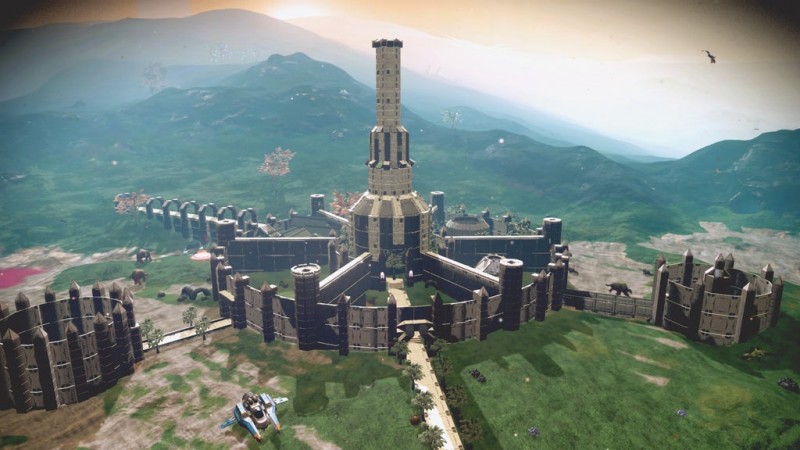 The Elder Scrolls IV: Oblivion turned 15 this year, and one player shared their love for the role-playing adventure by recreating the Imperial City in No Man’s Sky.

No Man’s Sky had an incredibly rocky launch. It was so rocky, in fact, that it hit record-breaking negative review numbers. The poor reception eventually caused developer Hello Games to go the reclusive route; the studio went head-down in an attempt to improve the game and turn perception around. After an extended period of silence, that 180 happened with No Man’s Sky Next, and the creative possibilities continue to expand to this date. One player decided to show off how awe-inspiring this game’s creative aspects are by faithfully recreated the Imperial City from Elder Scrolls IV: Oblivion.

Not only did u/BoidGaming impress the Reddit boards with their recreation of an iconic area from an even more iconic RPG, they even impressed one of the creators of No Man’s Sky. Sean Murray took to Twitter to share the creation, and the responses were on par with the responses on the initial Reddit thread, seen here.

This Redditor even has a YouTube channel further exploring their creations. Check out the video below showing off a closer look at the Imperial City:

Considering I feel like I can’t even make a box that looks halfway decent, recreations like this will never stop impressing me as a player. It’s incredible! Much like the dedication with the Elder Scrolls Whiterun recreation in Valheim, this Oblivion mod shows off some serious attention to detail. While I won’t ever have the patience or eye for creativity like these players do, I can at least sit back and enjoy the incredible work put in and admire just how much gamers take their love of titles to the next level.

What do you think about this No Man’s Sky player recreating the Imperial City from The Elder Scrolls IV: Oblivion? What would you like to see this particular YouTuber tackle next? Sound off with your thoughts in the comment section below! Long live the empire!