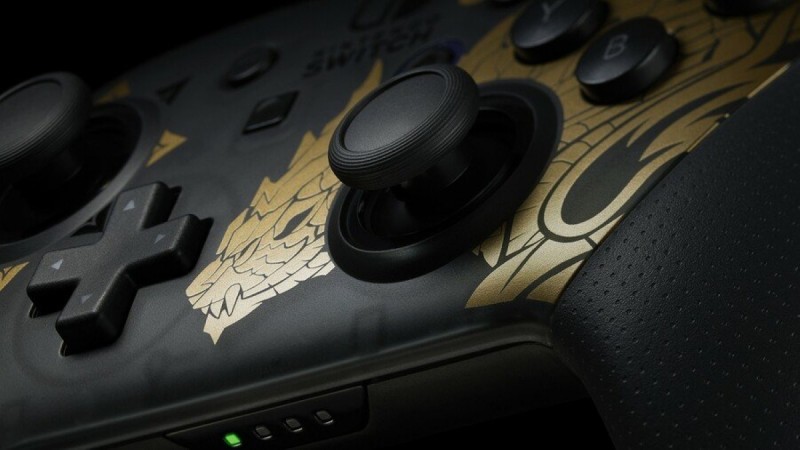 A new Monster Hunter Rise Nintendo Switch console and Pro controller have been revealed, getting RPG fans even more excited for the latest entry in the beloved beastie-hunting franchise.

The latest celebratory system comes with a bold Magnamalo emblazoned in gold on a black backdrop with similarly themed designs on the rear of the console. The Joy Cons as well have similar designs, though in black with gold accents on the thumbsticks alongside the Pro Controller that also has that golden touch.

Nintendo revealed a few new images showing off the Monster Hunter tribute, scroll through the gallery below to see the designs for yourself:

The Monster Hunter Rise bundle includes a download code for the new game plus the Deluxe Kit DLC and other non-specific bonus content. The system and Pro Controller itself will be launching on March 26, the same date as the game, making the launch of the latest Monster Hunter title even better.

As for the game itself, Monster Hunter Rise is an all-new hunting experience specifically designed for the Nintendo Switch. The upcoming adventure provides an all-new take on the monster-tracking experience with the introduction new mechanics such as the Wirebug, a wire-based grappling action that allows players to traverse dangerous or rocky terrain at high speeds, in addition to the new hunting partners called Palamutes.

The Monster Hunter Rise Nintendo Switch console, Pro Controller, and the game itself make their grand debut on March 26. What do you think about the latest rendition of the Switch? A must-have, or are you going to pass? Sound off with your thoughts in the comment section below!