Rhianna Pratchett, whose narrative mind has shaped stories in games like Mirror’s Edge, Tomb Raider, and many others, first met the creator of Lost Words: Beyond the Page at a game jam. At the time, Lost Words was about divorce. But that changed quickly once Pratchett signed on as the narrative lead.

“Of course, being a Pratchett, I said, ‘Well, what about death?'”

Pratchett is referring to her late father, Discworld author, Terry Pratchett — whose books frequently explore death and grief through their fantasy setting. Speaking to IGN, she says this shift was born out of her own personal experience with the death of loved ones, which ultimately heavily shaped Lost Words as well.

Lost Words is a narrative-focused platformer game that’s been out for over a year already, but one that many may have missed the first time around, as it was a Google Stadia-exclusive until recently, and it’s finally coming to Xbox One, PS4, Steam, and Nintendo Switch on April 6. Its story follows a young girl, Izzy, who aspires to be a writer. When she loses someone close to her, she works through her grief by writing a fantasy story in her journal. Play switches between journal segments with glimpses into Izzy’s personal life, and the fantasy story she’s writing, where she explores the feelings and ideas she’s struggling with in reality through her fantasy protagonist.

Pratchett, both through her family and in her own extensive work, is a firm proponent of exactly that — exploring difficult topics through fantasy stories.

“…I thought that it’s a very unique time in your life when you experience loss for the first time, and you suddenly realize that the world is not perfect, and bad things happen. And sometimes there’s nothing you can do about it.

“I have a very tiny family now because I have no relatives left apart from a mother and uncle and a cousin that I’ve grown up with, but I’ve lost several sets of grandparents and step-grandparents, and my dad. So I felt I had a lot to say about loss and grief and the intersection of loss of memory, grief, and memory and how we keep people alive by our memories and how we keep a part of them inside us.”

Pratchett is excited about Lost Words’ focus on storytelling, not just as a narrative device, but as part of the development process. Having written for games for nearly two decades, and as a journalist before that, Pratchett has been able to watch the trajectory of games writing and narrative change from something many studios tended to brush off or throw in messily at the end of a game’s development, to something developers and audiences care deeply about. And she’s proud to have been a part of that.

But she still feels that games have a long, long way to go to respect what good writing can do for a game, and refine what good games writing really means.

“Writers don’t get very much power, especially in the big games, and you don’t always get much space to necessarily get your voice or vision across,” she says. “And everyone thinks they can write because most people can write words, and they think writing words is the same as writing a story. And because they’ve usually never tried, in their heads, they’re sort of unproven geniuses.

“In the past, narrative wasn’t necessarily done by a writer. People didn’t particularly value it enough to push professionals in that field. It created the impression that anyone could write because anyone had been writing. So now, it feels like you have to deal with a lot of feedback, a lot of opinions all the time, usually from people that aren’t particularly story-literate…But they often have more power than writers. So if you’re trying to balance, you become very flexible, you have to learn to work with other people’s ideas…As people start to understand how stories work in games, it is getting better, but I did deal with a lot of people who thought they knew how to write telling me how to write.”

Which brings her back to Lost Words, where she was not just the game’s writer, but was closely involved in most aspects of Lost Words’ development. That’s the advantage, she says, of working on a smaller, independent team as opposed to being hired on as a narrative writer for a huge AAA project. You lose the bigger budget and the resources that may bring, sure, but you have a direct line to everyone on the team and can more closely marry gameplay and writing. 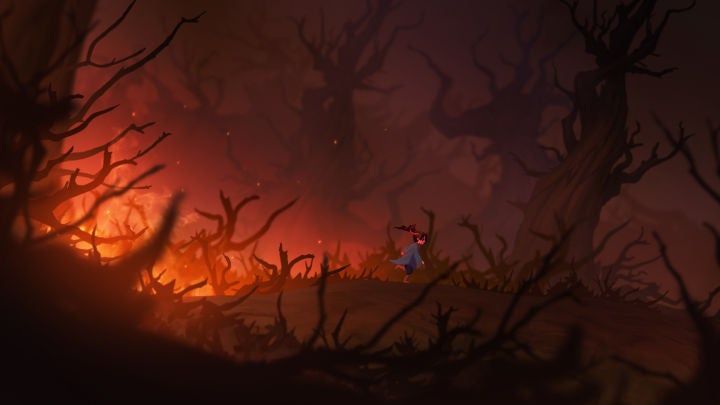 “I like being in a team where I can get my voice across; otherwise, what’s the point?” she says. “I’m not a story robot. I’m not there to just generate words. I’m there to bring my views and my vision and my thoughts as well.

“If you’re engaged in a game early on, there’s a lot that writers can bring to it. It often used to be this way and it still is to a certain extent now that the industry [thought that] writers did the word bits. They’d leave some space for the writer to do the word bits because they just do the word bits and the word bits come as late in the game as possible.

“Whereas actually a lot of what writers do is invisible work. It’s a lot of behind-the-scenes stuff, coming up with the lore of the world and tone and working out how things go in this world, how the character relationships go, a whole load of background stuff that the player won’t necessarily see. I call it building the body of the iceberg. We all know that the body of the iceberg is much bigger under the surface…So that the tip that the players actually see in the game is much more truthful and much more thought-out, much more well-realized, because you spent all this time building up the body of it. And if you’re lucky, you get time to be able to do that.”

Pratchett is delighted to see Lost Words get another chance to catch audiences’ eyes now that it’s releasing on platforms other than Stadia, and she hopes people considering picking it up will not be put off by the fact that it’s a story about grief. In fact, she says, it’s actually quite positive.

“It is sad,” she says. “But it’s also joyful, as well. It’s about love. And it’s about grief being the price for love. It’s about losing someone but keeping hold of them at the same time. And it’s taken from the perspective of someone that’s going through it for the first time. So it’s all kind of fresh and new, and difficult and painful as you just try to get your head around it. But in the end it is hopeful, it is positive, it is full of love. And so I hope people get that out of it.”

Rebekah Valentine is a news reporter for IGN. You can find her on Twitter @duckvalentine.