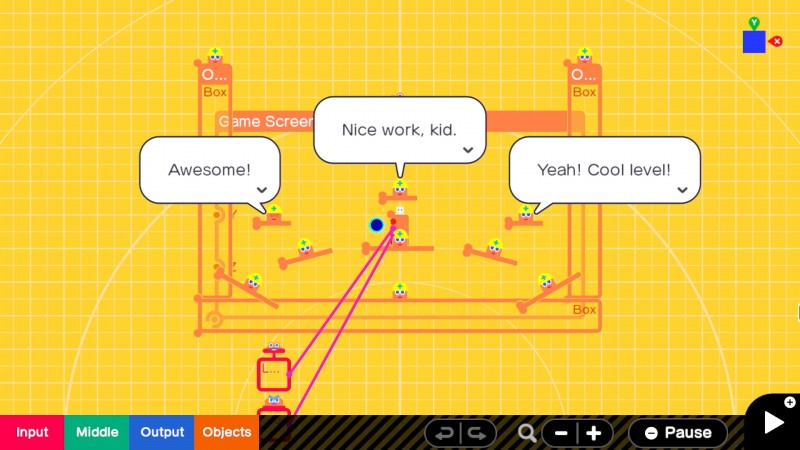 Nintendo has perhaps the longest, most illustrious track record in the history of the games industry, so if you’re hoping to learn the best ways to design and create your own video games, you’d be hard pressed to find a better instructor. While the gaming giant has released titles like Super Mario Maker 2 to give players a chance at designing their own creations, Nintendo hopes to build on that with Game Builder Garage.

Game Builder Garage takes concepts explored in the Super Mario Maker games, which are largely centered on design and experimentation, and brings them to a new level. Now, you not only design games, but learn the basics of visual programming with step-by-step lessons straight from Nintendo.

Each lesson walks you through the basics in understandable fashion, featuring a cast of characters brimming with personality called the Nodon. By assigning the Nodon specific functions, you can put them in charge of doing things like moving characters, pressing buttons, and adding sound effects. When you’re ready to see the progress you’ve made in the game, you can easily swap between the programming screen and the game screen. You can even build your games using the different control schemes of the Switch system, including buttons, touchscreen, or a USB mouse when in TV mode. As you complete lessons, you can show off your skills with checkpoint tests.

The included lessons teach you how to build seven distinct games, including Tag Showdown a two-player game of tag; On a Roll, a motion-controlled game where you navigate a ball through a maze; and Thrill Racer, a 3D racing title. Once you’re comfortable with the creation tools, you can let your imagination run wild in Free Programming, where you can use Nodon to your heart’s content to develop your dream creation.

When you’re satisfied with what you’ve made, you can exchange codes with friends to share your title, or download what they made and give it a spin. You can even look at the programming behind their creations to learn new tricks, or use the sharing feature to collaborate on a single project with friends.

Game Builder Garage sounds like a fascinating toolset for aspiring game designers. When I was a kid, I used to draw out crude design documents for sequels to my favorite games. Had a platform like Super Mario Maker or a toolset like Game Builder Garage existed back then, maybe I would have taken that process to the next level – sure, I had Mario Paint, but that doesn’t give you anything close to what either of the modern games offer would-be creators.

Game Builder Garage launches on Switch on June 11 for $30.

Ratchet and Clank: Rift Apart Looks Like a PS5 Showcase