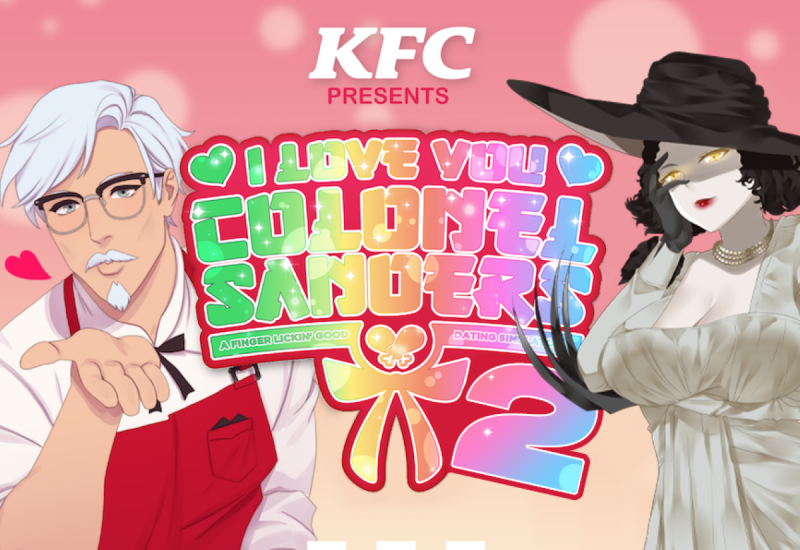 Everyone and their mothers are obsessed with the “Big Tall Vampire Lady” from Resident Evil Village, otherwise known by her actual name: Lady Dimitrescu. With cosplay and fanart galore, it looks like even KFC (yes, the fast food chain) is getting in on the thirst, because they revealed a crossover that no one asked for: Resident Evil Village meets I Love You, Colonel Sanders: KFC Dating Simulator.

KFC is “hip with the cool kids” because it has its own gamer brand with KFC Gaming and it was there that the crossover that actually kind of looks cool the longer we look at it made its debut:

A tall order to say the least… pic.twitter.com/RLie5R4hTO

We’re 99.99% sure that this was just a piece of mockup art to join the meme fray on Twitter, but the social media team has been awfully quiet when fans were asking if the “oh, god, please step on me” lady would actually be in the dating sim or not. Probably not, due to licensing, but boy would that be the shocker of the century if this turned out to be an actual crossover event.

For those that may be out of the loop, the KFC dating sim is legitimately a real thing; it’s a game that is free-to-play and is available now on Steam. “I Love You, Colonel Sanders! A Finger-Lickin’ Good Dating Simulator follows you, a promising culinary student, as you try to date your classmate, Colonel Sanders,” reads the game’s official description. “Throughout your journey, you’ll be faced with life-changing decisions that will affect your chances of friendship and love. But be careful! Your choices have real consequences with real animated characters’ feelings at stake.”

Would this be the weirdest crossover in gaming history? Oddly enough, no. Do we want to see it actually happen? Would you think less of us if we said yes? You would? That’s fair.

What do you think, beloved GI readers? Yay or nay on getting your throat stomped in by Lady Dimitrescu in the KFC dating sim? Weigh in with those thirsty thoughts in the comment section below.

Prince of Persia: The Sands of Time Remake Delayed Indefinitely

Subnautica: Below Zero Looks to Be More of What We Love