When you release a game like Monster Hunter: World, it’s hard to go back. While Monster Hunter has always been a massive success in Japan, it was originally a more niche series in the West. But now that World has officially become Capcom’s best selling game of all time, with more than 16 million copies sold as of September 2020 (and we’re not even counting Monster Hunter World: Iceborne’s additional 7.2 million units), it’s safe to say that Monster Hunter has become a worldwide phenomenon. Back in 2017, after the success of The Legend of Zelda: Breath of the Wild, Nintendo’s Eiji Aonuma suggested that Breath of the Wild might become “the basis” for future entries in the series, and it seems that Capcom is taking a similar approach with World for Monster Hunter’s foreseeable future.

It’s no coincidence that Monster Hunter Rise, Capcom’s newest installment in the series developed exclusively for the Nintendo Switch, is a seamless hunting experience with maps of approximately the same size as World’s vast environments. That’s impressive to say the least, especially when you take in account that it runs on a hybrid home-handheld console significantly less powerful than the dedicated home consoles. 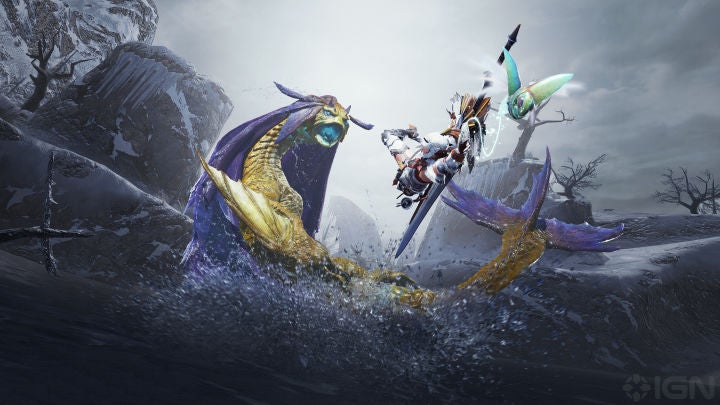 A Monstrous Standard to Live Up to

Interestingly, Rise’s development started long before the release of World under an entirely different team. Director Yasunori Ichinose tells IGN in an exclusive interview that the team originally planned areas separated by loading screens, as was standard for Monster Hunter games before World.

“On the Nintendo Switch, we thought it would be difficult to preserve visual quality and detail in a sandbox environment. However, as development progressed we started realizing that open environments had become more and more the norm for blockbuster titles, and the success of World inspired us to take on the challenge,” Ichinose recalls.

Shrine Ruins, the area showcased in the demo that launched on the Nintendo eShop back in January, is a testament to the efforts of Ichinose and his team. Not only did they manage to fully realize a seamless hunting experience on a similar scale as World (though with slightly less detailed environments), the game looks stunning on the Switch.

Open environments are not the only idea Rise borrows from World. With a more user-friendly design overall, World successfully introduced the series to a new audience. Quality of life improvements like wishlists that make it easy to keep track of the material necessary for weapon and armor upgrades, the ability to return to the camp from wherever you are on the map, allowing players to change equipment without having to go back to the hub, weapon trees that provide information you previously would have had to look up in walkthroughs before – the list goes on. “In this regard, there are certainly a lot of changes that we have adapted from World,” Ichinose says.

But Rise isn’t a title that simply leans on World’s success to play things safe. It utilizes World’s foundations to deliver a whole new vision for what a Monster Hunter title can be. The moment you hop into a mission, it becomes apparent that Rise is a much more action-oriented beast, literally speaking. With Palamutes (a new dog-like Buddy) that you can mount and Wirebugs you can utilize to swing through air and run up walls, the help of these creatures makes exploring the environments a breeze. While World showed you its detailed environments by having you examine footprints and other clues that would slowly lead you to your target, in Rise you will be swinging your way to the monsters in no time.

The Scoutflies that guided you to the next track in World are gone too, and instead the locations of monsters are indicated on the map from the start. While you don’t know the identity of the monster until you encounter it, and the details of each area until you actually explore it, it remains obvious that Rise aims for a much more fast-paced flow of exploration. For players who were put off by the time-consuming search for monsters in previous entries, Rise lowers the bar significantly by allowing players to enjoy its exploration and combat more like a pure action game.

Whereas up until now preparing for the hunt was a big part of Monster Hunter’s identity, Rise allows players to prepare entirely on the way. Various types of Endemic Life are scattered throughout Rise’s areas, and by collecting these creatures on the way your stats will increase until the end of the quest. The Endemic Life you encounter depends on which route you take, and heading for your target in a straight line will make the hunt significantly more challenging.

While it’s still possible to eat meals before heading into a quest, Endemic Life alone offers plenty of stat-boosting for players to head straight into the action without having to regret doing so later on. Similar to World, items like Whetstones, fishing rods and capture nets are all fixed items, and while maintaining weapon sharpness with Whetsones is still a thing, you can do so while riding your Palamute on your way to the monster’s whereabouts, so you don’t need to stop – like with Iceborne’s Raider Ride. Furthermore, while in previous entries you would be in trouble if you forgot to prepare a Hot Drink when heading into a cold area like Frost Islands, Ichinose has announced that this item won’t be making a comeback. For players that enjoyed Monster Hunter’s action but were overwhelmed by its layers of preparation, Rise seems to be a much more forgiving experience.

That doesn’t mean that the action itself has become a piece of cake. As the demo’s Intermediate Quest indicates, slaughtering a monster can still be as exhausting and nerve-racking as ever, providing a good challenge even for the more seasoned player. But here, too, Capcom has found a way to make it more accessible. By eating meals before heading into the quest and catching as many Endemic Life creatures as possible to max out their stats before heading into battle, players can take on the challenge with more advantages than ever before. The beauty lies in that while Capcom still chooses not to implement difficulty settings, you can balance the difficulty for each individual quest yourself by choosing how many stat boosts you pick up on the way. If you want the hardcore experience, ignore both meals and Endemic Life entirely.

“I think that the more experienced hunter doesn’t need to make detours before heading into a fight, but if you want a well-balanced challenge you probably want to at least pick up the Endemic Life you come across while going after your target,” Ichinose advises.

Still, the nature of Monster Hunter’s challenging and ultimately rewarding battles remains intact. If you’re new to the series, expect to get your ass kicked several times on the more difficult quests, even with your stats maxed out. To make the learning curve a bit more approachable, Ichinose advises beginning players to start with the Village Quests. In previous Monster Hunter games, Village Quests are the single-player only story quests.

“We have scaled down the difficulty for Village Quests, so they should function as a good entry point for new players,” Ichinose tells us. 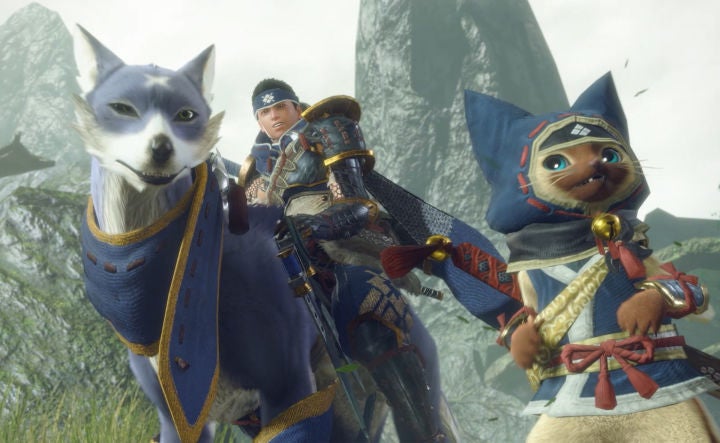 As in previous entries, Buddies will be there to aid you on your quest. Palicoes, the series’ beloved feline critters, can support the player in various ways, ranging from offensive Palicoes that will charge at monsters together with the hunter, to Palicoes that will heal you when you need it most. But the aforementioned Palamute hounds create an entirely new layer of support and comfort. Not only do they make exploration much faster-paced, but you can also perform synchronized attacks together as well, making it possible to quickly head into close combat for a surprise attack.

“You can choose up to two Buddies. Of course, the most basic and balanced combination is to take along one Palico and Palamute each. But if you’re a gunner, for example, choosing two Palicoes instead can be an effective strategy as well,” Ichinose explains.

If even with your Buddies the hunt is too intense, there’s always the option to switch to multiplayer. Ichinose tells us that connecting with other players has become streamlined as well. Whereas in World your friends would only appear in the Gathering Hub on the fourth floor of the village, in Rise the entirety of Kamura Village can be explored together with other players, making gathering a lot less confusing.

You can even head into the Training Area together to test your teamwork without any threat before heading into actual quests. And while there are separate tutorials for mastering the wire-jumping action, Wirebugs can be used within the village as well. You can always fast-travel to any facility in the village, but swinging your way around can function as a way to get used to the game’s new mobility in a safe environment. Ichinose proudly tells us that he himself has become able to swing around and land exactly in front of the village’s facilities and NPCs.

The Training Area has evolved as well, as players can adjust the attack patterns and position of the head of the giant mechanized Tetranadon in the center of the area. This allows players to practice for different situations with their weapon of choice.

Weapons Are Still Hard to Master, Easier to Upgrade

Speaking of weapons, Ichinose hopes that players will switch weapons more frequently than before. While he understands the fun of becoming an expert in one specific weapon, with 14 vastly different weapons available, such players will only experience one fraction of Monster Hunter’s diversity.

“One reason for players to stick with the same weapon was always the fact that it takes so much time to upgrade weapons, which is why we decided to significantly reduce the amount of materials necessary to upgrade weapons for Rise,” Ichinose tells us.

Considering that grinding for materials in previous titles could easily take hours, this tweak sounds like another huge step forward in welcoming more casual players.

Mastering weapons itself is as challenging as ever, and tutorials still only scratch the surface of the many combos each weapon has. Ichinose tells us that the team did consider teaching the player more combos, but they ultimately came to the conclusion that this would be more confusing and overwhelming than helpful for most players.

When asked the best weapon to start with, Ichinose says that the Sword & Shield used to be his standard answer, but the weapon has evolved so much that it has become difficult to recommend as a starter option.

“I think that the Long Sword may have become the best weapon for beginners, as you can easily deliver a good flow of attacks by simply pressing the buttons while not having to master how to block,” Ichinose says.

With sword-drawing techniques based on katana swords, the Long Sword should be a great match with Rise’s Japan-inspired setting, too!

Monster Hunter Rise is due for release on Nintendo Switch on March 26.

Esra Krabbe is an editor at IGN JAPAN. When he’s not out hunting, you can usually find him on TwitterIGN sits down with Monster Hunter Rise Director Yasunori Ichinose to learn what the team has done to make the series more accessible than ever before..

Activision says that new remastered content will be revealed this year