With the series following a Japan-inspired theme for the first time in over 10 years, the monsters in Monster Hunter Rise are something else. Director Yasunori Ichinose explains how the art team was inspired by ghosts and spirits of Japanese folklore, or yokai, for the design of Rise’s new monsters. Furthermore, The Rampage – a catastrophic event in which a horde of monsters attack Rise’s hub Kamura Village – was inspired by Hyakki Yako, an ancient Japanese myth often translated as “night parade of one hundred demons.”

“Hyakki Yako portrays countless yokai parading at night. We wanted to recreate that image in the world of Monster Hunter,” Ichinose says.

See all the comparisons between monsters and yokai in the slide-show above with additional concept art and explanations!

To give The Rampage an authentic feel that actually resembles Hyakki Yako’s parade of ghosts, Ichinose and his team sought inspiration from yokai as well as other Japanese legendary creatures and stories for Rise’s new monsters. Ichinose gave us a thorough explanation of how seven of these monsters came to be. 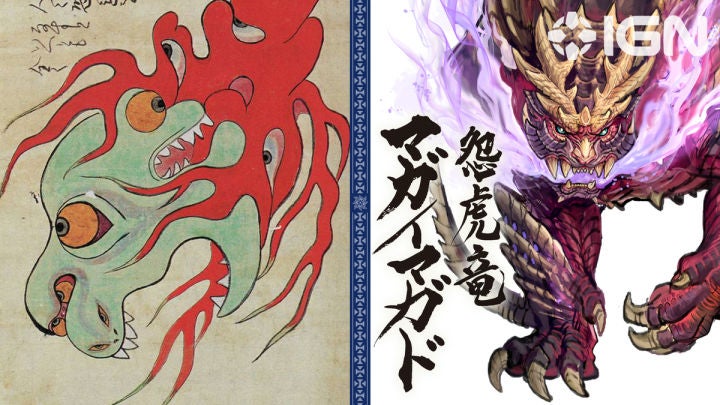 “Magnamalo will be Rise’s main monster, and is Kamura Village’s biggest threat together with The Rampage,” says Ichinose. “The main inspiration for Magnamalo came from samurai armor. While not a yokai per se, an armored samurai ghost is a well-known image, and we took this as the base for Magnamalo’s design.”

Ichinose further explains that hitodama, or balls of fire that float around at night, are often associated with armored samurai ghosts, as they are said to be the souls of the dead.

“That’s why Magnamalo emits a gas from his body that looks like onibi (ghost light),” explains Ichinose. Apart from the obvious Japanese inspirations, Ichinose says that Magnamalo’s design was also inspired by tigers that inhabit other Asian countries. 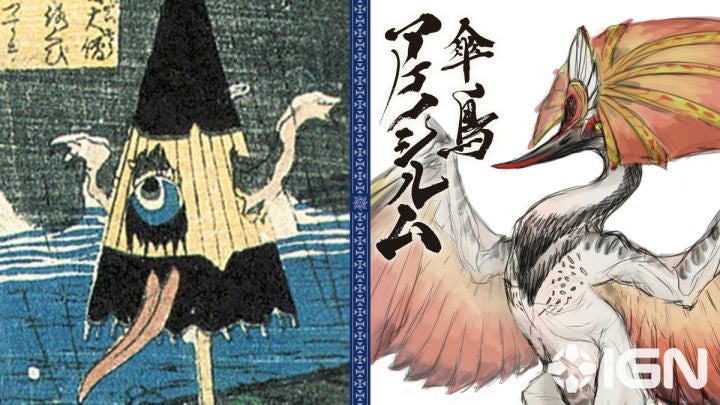 The Aknosom was designed as a combination between a crane and kasa-obake, a well-known yokai that is shaped like an umbrella. Kasa-obake have appeared in other video games such as Nioh, Yo-kai Watch 2 and Pocky & Rocky as well.

“When a crane stands on one foot, it looks just like an umbrella, which is why we chose to combine them together,” says Ichinose. “When it closes its wings, its patterns resemble an umbrella with a long tongue, which is a hallmark of kasa-obake’s feisty attitude.” 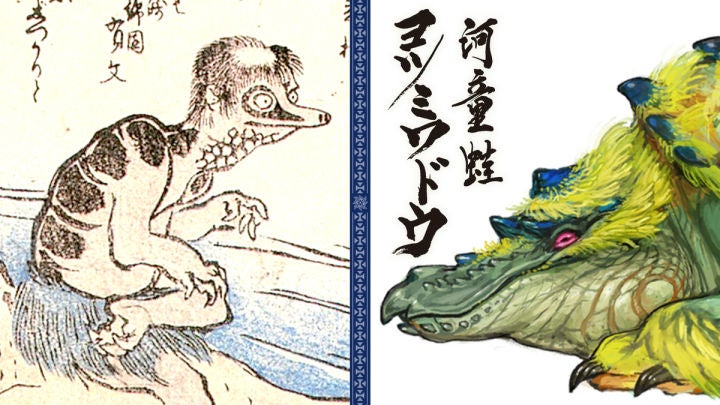 The Tetranadon was based on kappa, one of the most common yokai in Japanese folklore, with many legends and stories that have spread throughout the country. A kappa is a green creature that is often depicted as a mix between a young boy and a turtle. While Tetranadon’s design obviously does not resemble a young boy, you can definitely notice its turtle heritage.

“We looked at creatures that live near water. Turtles, crocodiles… even platypuses!” Ichinose recalls.

Another renowned characteristic of kappa is the dish-shaped depression on top of their head, which can be seen on Tetranadon’s head as well, giving it a slightly more cute look than your average Monster Hunter creature. 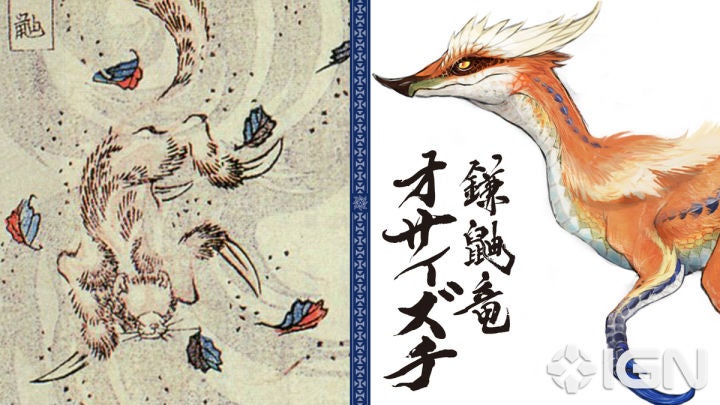 The Great Izuchi was inspired by kamaitachi, one of the sneakiest yokai. The kamaitachi is a weasel-like creature that attacks people in the midst of a whirlwind, but it attacks so fast that its victims don’t even notice.

“The kamaitachi work together in a group of three, which is why the Great Izuchi has two regular Izuchi help out,” Ichinose explains.

The kamaitachi strikes with either its scythe-shaped tail or its hands, which is why it should be no surprise that the Great Izuchi’s tail has the shape of a giant scythe as well.

“To make the design match Monster Hunter’s world, we made the Izuchi raptor-type creatures,” Ichinose adds. 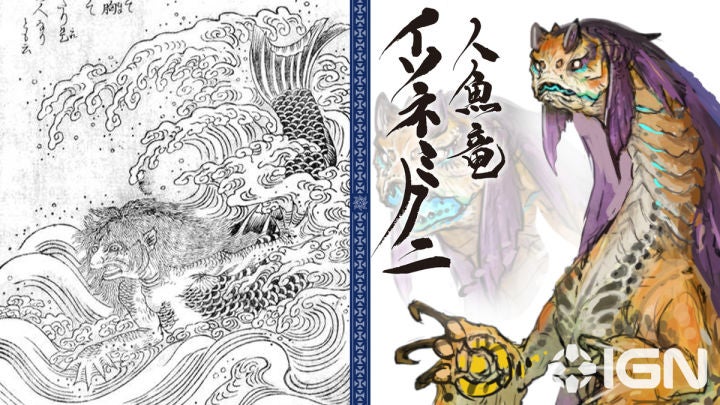 The Somnacanth is a mixture between Western and Japanese mermaids. While its appearance is as menacing as any monster in the series, the Somnacanth swims in style and has a mesmerizing singing voice. Ichinose says that the team looked at sea otters for Somnacanth’s way of swimming.

“Western mermaids are known to lead people astray with their beauty, and we wanted to add a similar aspect to Somnacanth’s identity. Leading the player astray is a bit difficult to interpret as a gameplay mechanic, so we chose to give Somnacanth the ability to put the player to sleep instead,” Ichinose explains. 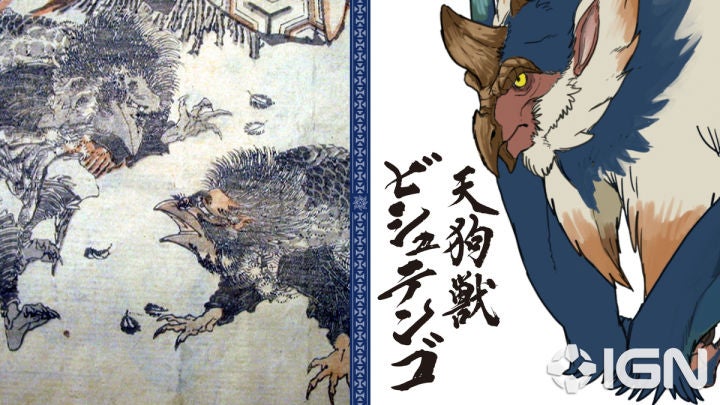 The Bishaten was inspired by tengu, another staple creature in Japanese folklore. The tengu shares similarities with Western devils, and is said to lure people to the evil path. Its most common appearance sports a red face and long nose, but there are many different sorts of tengu. Ichinose tells us that Bishaten was inspired by the most common image of a tengu, as well as the karasu-tengu, which has a sharp nose and looks like a crow.

“While Bishaten’s skeleton is close to that of a monkey, its tail is the shape of the fan a tengu often holds in his hands. It throws items at the hunter such as persimmon fruit, which shows that it is a monster of high intelligence,” Ichinose says.

Another feature of the Bishaten is that it shows a wide variety of facial expressions, Ichinose tells us.

For Goss Harag the team referenced namahage, a beast that appears at a traditional festival in certain areas of Akita Prefecture in Japan. At this event, men dressed as demon-like beings in straw capes with either red or blue ogre masks and (fake) knives go door-to-door to frighten children that have misbehaved.

“When we were thinking of monsters that inhabit the Frost Islands, namahage came to mind, as Akita is a very cold and snowy area in the northeast of Japan,” Ichinose tells us.

With a huge ice blade attached to his right hand, the Goss Harag will surely give Monster Hunter Rise players a good scare!