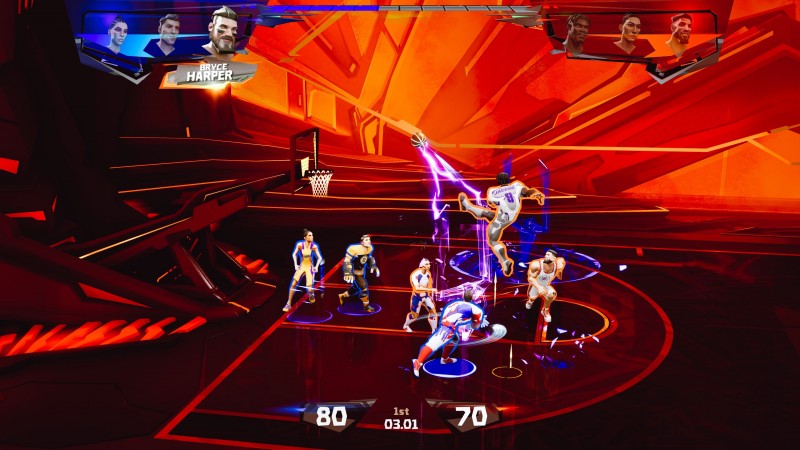 When Skylanders and Disney Infinity were flying off of store shelves, Bit Fry Game Studios almost made a toys-to-life sports title. I was shown a prototype of a Wayne Gretzky figure that would be used for the game by Ben Freidlin, Bit Fry’s founder and CEO. The hope was to create a game that blended athletes from all major professional sports, whether it was hockey or baseball, to compete in all sports whether they knew how to in real life or not. As development of this title ramped up, the entire toys-to-life category collapsed, and Bit Fry wisely pivoted to adapt its vision to a standard video game format.

Drawing heavy inspiration from the NBA Jam games of old, The Court delivers fast-paced, dunk-heavy 3-v-3 basketball action that runs at a smooth 60 frames-per-second. It launches this year on Apple Arcade, but will later be released on Steam, as well as unspecified consoles. Here’s hoping it comes to PlayStation 5, Xbox Series X/S, and Switch!

In creating The Court’s dynamic action, Freidlin tells me that Bit Fry looked at fighting games just as much as action-sports. “The mechanics are learnable instantly, but the theory crafting is deep,” he adds. When picking a roster, players shouldn’t just be picking the athletes they know and love, and instead should be thinking about how their team of three sits against their opponents’. Athletes from different sports have different skill sets. Yes, Lebron James will be a well rounded superstar, but a quarterback like Drew Brees has better accuracy at hitting a full-court shot given his ability to throw the ball downfield. Animations, shots, and deke moves are also different for various athletes and their sports.

As you can see in the image above, the game has superhero-like qualities to it, allowing for hockey players to turn to ice and everyone to be able to soar higher than they should. As amazing feats are performed, a familiar voice from the past will amplify their excitement. Bit Fry has enlisted the voice-acting talents of Tim Kitzrow (of NBA Jam and NFL Blitz fame) to provide commentary. We doubt he’ll scream “He’s on fire,” but we’re sure he’ll have some other zingers that will get stuck in our heads. If you check out the trailer below, you can hear him say the line that put him on the map.

Along with the 70-plus athletes from The Rink, Bit Fry is expanding the roster to over 140 competitors, many are NBA stars from today and yesterday, but you’ll also see famed names from other sports as well. Bit Fry doesn’t want to announce every player just yet, but from the NBA side, players can look forward to suiting up as Stephen Curry, Giannis Antekounmpo, Luka Doncic, Paul George, and Damian Lillard. As for other sports, the addition’s include the MLB’s Bryce Harper, the WNBA’s Candace Parker, the NHL’s Patrice Bergeron, the NFL’s Lamar Jackson, and USWNT’s Christen Press.

The Court is designed with short game sessions in mind – both for online competitive play and against A.I. Along with the standard touch controls, it supports bluetooth-connected console controllers. Freidlin says plenty of depth awaits in a challenge mode called The Gauntlet, and players can also enter a training mode to figure out their perfect team chemistry and to master the moves. “The training mode is modeled after Street Fighter and Mortal Kombat,” he says.

In a world without NBA Jam games, I’m hoping Ultimate Rivals: The Court can pick up the torch and set fire to this genre again, especially since it will be expanding to other platforms later this year.