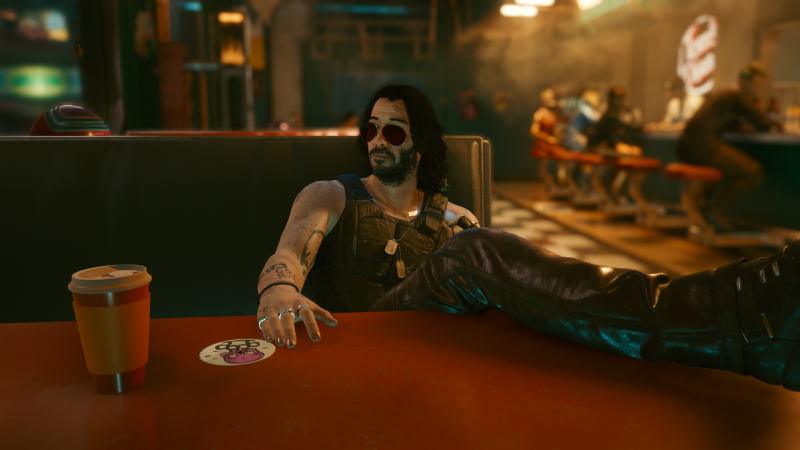 Gamers have been modding Cyberpunk 2077 since the title launched late last year but now that there is official mod support from CD Projekt Red, fans are going wild with the possibilities. That being said, CDPR doesn’t want players getting too wild. To jump ahead of the inevitable curve after one mod gained insurmountable popularity, the studio has banned mods that allow for V to have sex with Keanu Reeves’ character Johnny Silverhand.

As expected (rule 34, anyone?), the inevitable nude and romance mods have hit the world of Night City, including one that uses cut content to piece together a fully voiced Judy romance for a Male V. Another mod soon followed after, created by modder Catmino, that allowed for players to tweak the in-game textures with other models in order to have sex with virtually whoever they want. Included in that is Keanu Reeves’ character, texturizing the rocker bad boy onto a sex robot named Joytoy.

Making a change like that wasn’t hard, there are canon scenes within the game starring Silverhand that are incredible sexual in nature, so making that jump through retextures is something that was going to happen. But just because it was bound to happen doesn’t mean that the studio is happy about it (and not just because it’s just a bad mod, the scene has Keanu’s face but Joytoy’s voice and it’s just nine shades of awkward).

The Joytoy tweak in question was only up for a short while before Eurogamer noticed it was removed from Nexus Mods with the “clearing things out with CDPR” update where the mod used to be. As for why it was removed, the studio issued the following statement to PC Gamer:

“Our most important rule regarding user-generated content, game mods in particular, is that it can’t be harmful towards others. In the case of model swaps, especially those that involve explicit situations, it can be perceived as such by the people who lent us their appearance for the purpose of creating characters in Cyberpunk 2077.

“Therefore, when making fan content, creators have to make sure they’ve got permission from all the concerned parties (which might be people other than CD Projekt Red). For the characters we’ve invented for the game, we broadly permit you to tweak the game at will and just have fun. When it comes to models of real people whom we’ve asked to participate in the game, we kindly ask you to refrain from using them in any situation that might be found offensive if you don’t have their explicit permission.”