BasicallyIDoWrk, I AM WILDCAT, and Terroriser On Their New Show ‘Alpha Betas’ 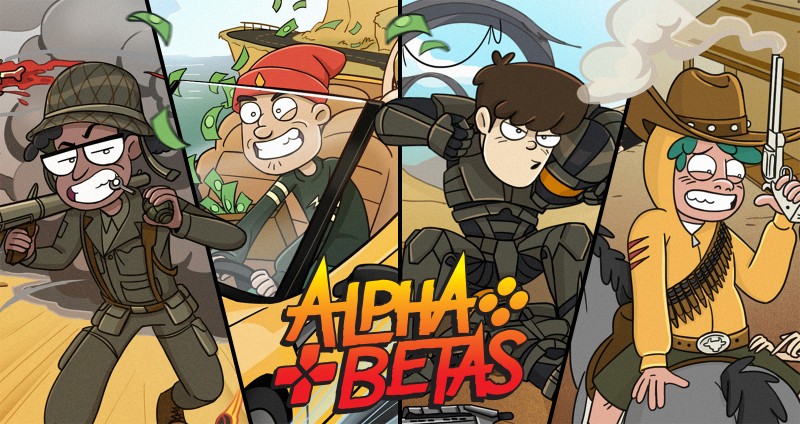 In a world where gaming adaptations are a dime a dozen, a new show hovers over the horizon that aims to do something new. Instead of adapting a game series that is beloved by many, a group of YouTubers is joined by some serious talent to save the world through the power of gaming. No, but like seriously, it’s a whole CIA organization, big deal, very complicated.

This show follows the story of an elite virtual strike force of four l33t gamers. Their mission that they really have no choice but to accept? Jump into a plethora of video game realms to help solve world-ending problems. Known as the Alpha Betas, this crew is as reckless as they are arrogant, so you know everything is just going to be honky-dory.

Join Alex Stadnik and Liana Ruppert as they sit down with Alpha Betas stars BassicallyIDoWrk as Mason, I AM WILDCAT as Tommy, and Terroriser as Buck and explore what it was like working with talent like Paget Brewster (Friends), Stephanie Beatriz (Brooklyn Nine-Nine), Chris Parnell (SNL), Brent Morin (Chelsea Lately), and John DiMaggio (Futurama).

This crew, alongside VanossGaming (who plays Eddie), has years of experience working together on their own channels, channels with millions of subscribers who love their type of humor. Translating that humor into a show is actually a lot easier than some might think. We talked about inspiration, goals, humor, and we got a little too deep into some “no-no” topics that had their PR pondering if they needed to hit that big red STOP button. Luckily for us, there was no stopping this train once it got started.

So join us while we chat, bond, and look forward to the future as we celebrate gaming culture and the new show that aims to do it justice.

Where can you watch it, you might be asking? The Alpha Betas pilot will be premiering exclusively on VanossGaming’s YouTube channel here on March 13! If you like it, we could be seeing even more from this crew and the studio behind Rick & Morty.

How to Find, Mine, and Smelt Every Ore in Valheim