The year is 1926 and the truth that you are seeking may be hidden in the corner of your eye, but do you really wish to discover it? Professor Tillinghast has been found dead in her mansion and you were amongst the first on this bloody and bizarre crime scene. This investigation will take you on the fringe of reality and it will be up to you to stay away from the madness. Find clues, interrogate witnesses, fight if you have to. And as you dive deeper and deeper into this terra incognita, remember: madness begins when reality departs.

Arkham Horror: Mother’s Embrace is a narrative-driven tactical RPG based on the award-winning Lovecraftian adventure board game coming to Xbox March 23, with a pre-order offer opening today!

Gather a squad from 12 of the most iconic protagonists from the Arkham Horror universe, each with a unique skill set, and assemble a team of investigators to uncover the secrets behind this mysterious death. Grab your magnifying glass, your favorite weapons, or even… a book of spells and visit the most shadowed institutions and mysterious places, ranging from Miskatonic University, the Arkham Asylum, and the bayous of Louisiana.

Stand against living nightmares and a sinister cult and try to remain sane. Because you are walking a tightrope and your sanity is all that prevents you from falling off the side.

Dive into the Lovecraftian pulp America to find the truth, however, it might not be the truth you were looking for. Will you embrace the madness that comes with knowledge? The mystery will unfold on March 23. 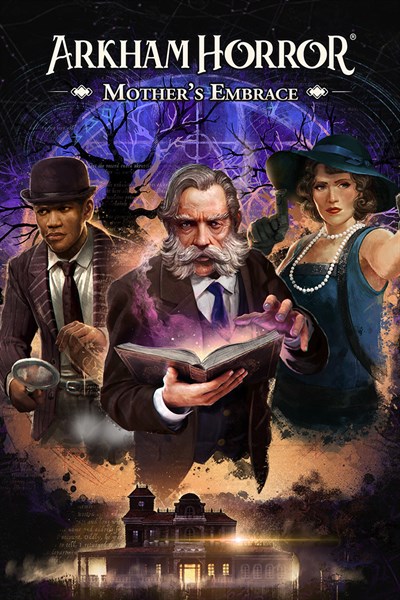 The year is 1926: a professor of astronomy is found dead in her mansion and everything indicates that she has been the victim of a heinous murder. Choose from 12 intrepid investigators from the Arkham Horror games, each with a unique set of skills, and assemble your team to shed the light over this mysterious death.

Find clues, perform interrogations and progress through nine chapters as the story unfolds. Your investigation will take you to visit  shadowed institutions and mysterious locales, ranging from Miskatonic University, the Arkham Asylum, and the bayous of Louisiana.

As the investigators get closer to their goal, your squad will have to face curious science, living nightmares, and a sinister cult, whose mad scheme is to bring about the end of everything. Use a large variety of melee and ranged weapons, as well as powerful items and devastating magic spells to defeat your opponents in turn-based combat; while you attempt to retain your sanity.

As you face off against Lovecraftian horrors, your investigators will descend deeper into the depths of madness, affecting their level of sanity and causing traumas that will impact the course of your investigation. Care about your sanity and make the right choices … the Ancient Ones are preparing their return.

Valheim: How to Summon and Defeat The Elder

What Is Call Of Duty Zombies Outbreak And Why Is It A Big Deal?