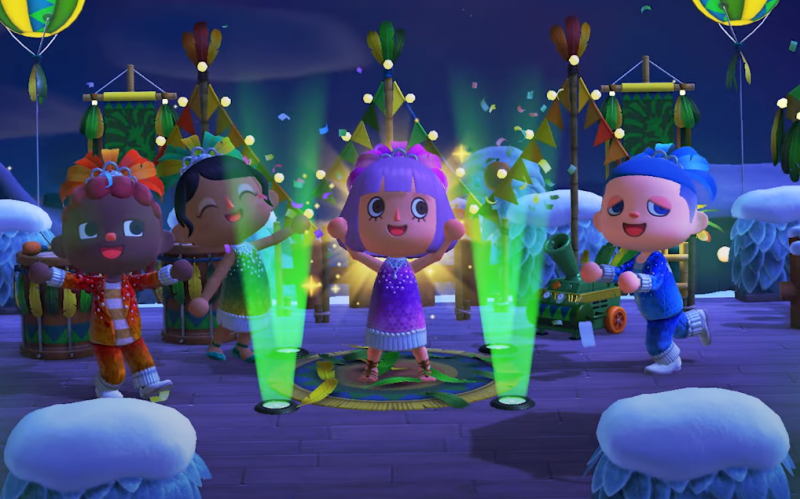 January is coming to a close, but that doesn’t mean that it’s over quite yet for Animal Crossing fans. In a new video, Nintendo revealed what players can expect from the upcoming Animal Crossing: New Horizons January update alongside a small tease of what’s ahead for the next big drop coming in March with a special Mario crossover.

The upcoming update that goes live on January 28 provides a ton of new updates but also heralds in the arrival of Festivale. Festivale is a carnival-style event that will go down on February 15 and brings with it the arrival of Dancer Pavé.

Dancer Pavé will arrive to your island’s plaza to usher in some confetti and carnival spirit. On the day of the event you can capture colorful feathers floating on your island with your net and trade them to Pavé to receive a passionate dance number in return. Rainbow feathers seem to be an especially rare sight, so be sure to catch them and trade them with Pavé.

New Horizons players can also look forward to even more clothes to style themselves to perfection, as well as new reactions to better convey those inner thoughts and feelings while living that island life to the fullest.

The above trailer also teases a few new events on the way, including new themed items for holidays like Valentine’s Day and Groundhog’s Day before the next big event that is slated for March.

While a small teaser, Nintendo also confirmed its upcoming March update, which will include a special Super Mario crossover.

From carnival to Super Mario, the next few months are going to be exciting for Animal Crossing: New Horizons fans. While the game has been out for just shy of one year, Nintendo has done a phenomenal job at ensuring the experience never grows stale with a constant rotation of events and new items to explore.

What do you think about the January and March updates for Animal Crossing: New Horizons? Shout those thoughts out loud and proud in the comment section below!

Magic: Legends Blends Diablo with the Classic CCG in Some Exciting Ways

Biomutant: Where to Preorder Ahead of Its Release Later This Year